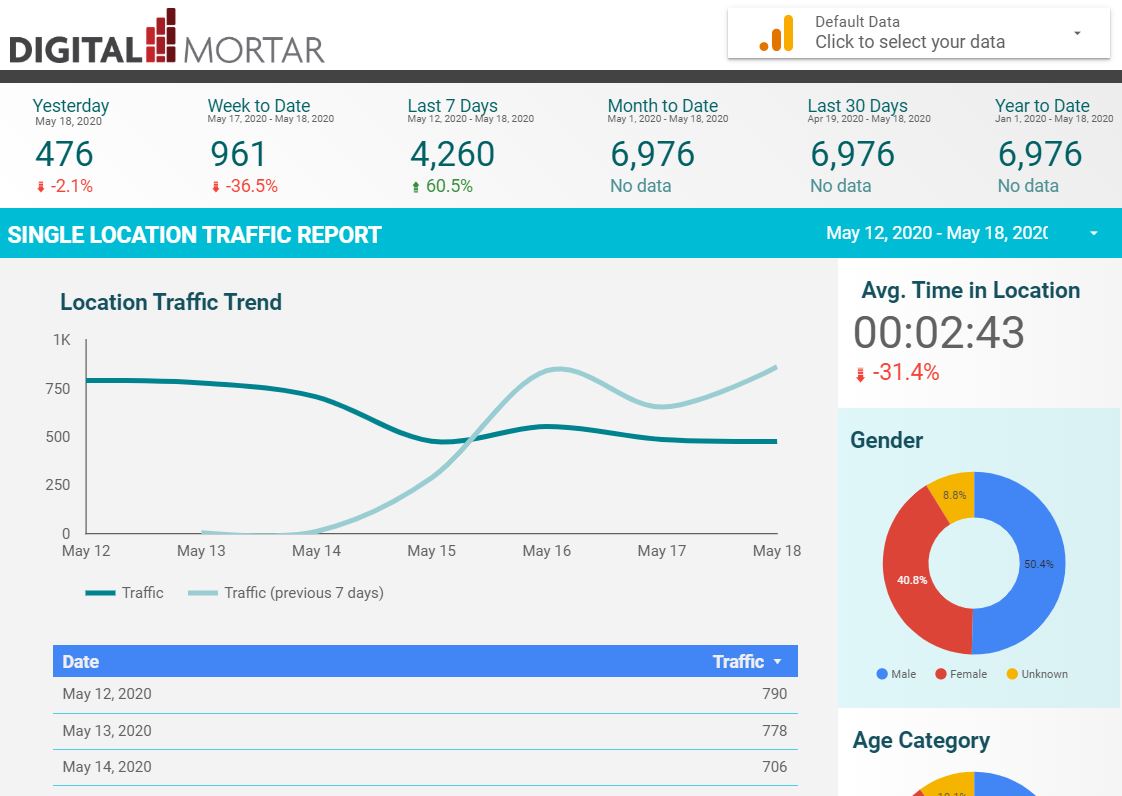 Google Analytics might be the single best behavioral analytics tool ever built. It’s streamlined, elegant, very capable and incredibly user-friendly. It also happens to be free. So it’s no surprise that it’s the tool of choice for the vast majority of people doing digital analytics. Almost everybody runs Google Analytics and almost every organization has someone who knows how to use it.

At the same time, there’s been a surge of interest in people-counting and occupancy management driven by necessities of occupancy control and safe-distancing. Even large companies are struggling with this. I’ve had disastrous experiences at Home Depot and I can’t believe that places like Safeway have to dedicate a person to standing at the door with a clicker. There really are better ways to do this. But throwing technology at the problem isn’t enough. It has to be really cheap because nobody has money to throw around right now and is has be EASY to use because it has to operationalized immediately.

Put those two things together and you have a marriage made in heaven. We recently released the first ever Google Analytics driven people-counting and occupancy management solution. It uses state-of-the-art people counting cameras and our advanced post-processing to source data directly into Google Analytics. Which is really the magic because that lets us deliver the solution for an extraordinarily low cost.

It means you get highly-accurate, real-time, people-counting using the best possible analytics software at an incredibly cheap price. How cheap? It’s $20 a month per store. And we throw in the mobile app for free. That person standing with a clicker at the door – they can actually be stocking or checking now. Which means the solution pays for itself in about 2 hours. How’s the for ROI?

Best of all, you save money compared to what you’ve been paying for door-counting. It’s a better solution. Probably more accurate. Certainly easier to use. Definitely more flexible. And a whole LOT cheaper. Did I mention it was cheaper?

For a lot of digital analytics people, using Google Analytics won’t need much explication. They already know and love Google Analytics. But if you don’t have experience with GA, here’s the skinny.

First, as the name implies, Google Analytics is built and “sold” by Google. I put quotes around the sold because it’s mostly free. It’s been around for a long time now and it’s the de-facto standard in doing digital analytics.

So why is having Door Counting in Google Analytics a good thing? It starts with the fact that it’s Google. The largest and most respected software company in the world. The company that lets you search the internet, read your mail, share calendars, and watch videos. They build great software and Google Analytics is one of their best products.

GA is core to what Google does. People use it to analyze search and ad campaigns – which is how Google makes its money. That’s why it’s free and that’s why they pour an incredible amount of resources into making it a great product. The GA development teams dwarf the combined development teams of every company producing retail analytics people-counting software (including ours of course) and it shows.

Second, because Google Analytics is used by something like 70 million websites, it’s built for every user. It’s easy, smart, fast, and incredibly capable.

Third, Google keeps adding capabilities to the platform and expanding it. You probably already use it in your organization and have people who know how to use it. They can take full advantage of its capabilities.

Fourth, putting store data into GA means it will live side by side with your Web data. Just like god intended.

Fifth, GA comes with it’s own great Mobile App and a full API – meaning that you can use it however, whenever and wherever you want.

In short GA is an awesome product designed specifically to measure behavioral analytics and deliver that intelligence to as many users as possible. All of which makes it the perfect choice for delivering people-counting and occupancy management.