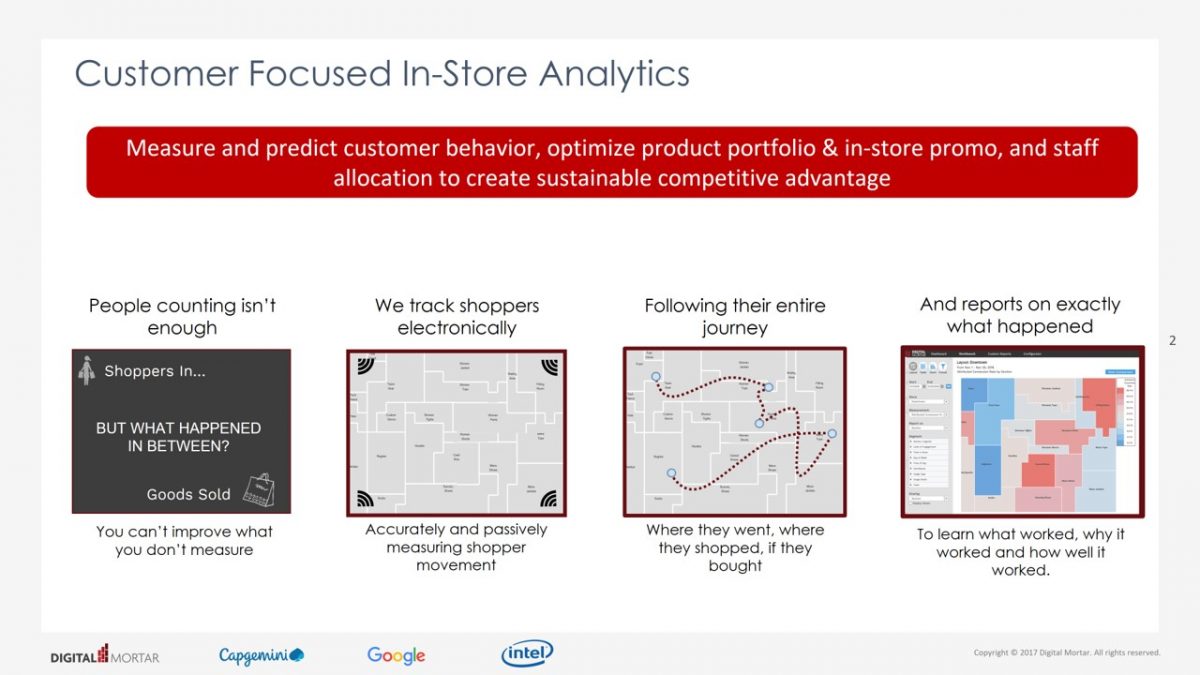 It’s been a little more than a year now for me in store analytics and with the time right after Christmas and the chance to see the industry’s latest at NRF 2018, it seems like a good time to reflect on what I’ve learned and where I think things are headed.

The Current State of Stores

Given the retail apocalypse meme, it’s obvious that 2017 was a very tough year. But the sheer number of store closings masked other statistics – including fairly robust in-store spending growth – that tell a different story. There’s no doubt that stores saddled with a lot of bad real-estate and muddied brands got pounded in 2017. I’ve written before that one of the unique economic aspects of online from a marketplace standpoint is the absence of friction. That lack of friction makes it possible for one player (you know who) to dominate in a way that could never have happened in physical retail. At the same time, digital has greatly reduced overall retail friction. And that reduction means that shoppers are not inclined to shop at bad stores just to achieve geographic convenience. So the unsatisfying end of the store market is getting absolutely crushed – and frankly – nothing is going to save it. Digital has created a world that is very unforgiving to bad experience.

On the other hand, if you can exceed that threshold, it seems pretty clear that there is a legitimate and very significant role for physical stores. And then the key question becomes, can you use analytics to make stores an asset.

So let’s talk about…

It’s pretty rough out there. A lot of companies have experimented with in-store shopper measurement using a variety of technologies. Mostly, those efforts haven’t been successful and I think there are two reasons for that. First, this type of store analytics is new and most of the stores trying it don’t have dedicated analytics teams who can use the data. IT led projects are great for getting the infrastructure in the store, but without dedicated analytics the business value isn’t going to materialize. I saw that same pattern for years in web analytics before the digital analytics function was standardized and (nearly always) located on the business side. Second, the products most stores are using just suck. I really do feel for any analyst trying to use the deeply flawed, highly aggregated data that gets produced and presented by most of the “solutions” out there. They don’t give analysts enough access to the data to be able to clean it, and they don’t to a very good job cleaning it themselves. And even when the data is acceptable, the depth of reporting and analytics isn’t.

So when I talk to company’s that have invested in existing non Digital Mortar store analytics solutions, what I mostly hear is a litany of complaints and failure. We tried it, but it was too expensive. We didn’t see the value. It didn’t work very well.

I get it. The bottom line is that for analytics to be useful, the data has to be reasonably accurate, the analytics platform has to provide reasonable access to the data and you must have resources who can use it. Oh – and you have to be willing to make changes and actually use the data.

There’s a lot of maturing to do across all of these dimensions. It’s really just this simple. If you are serious about analytics, you have to invest in it. Dollars and organizational capital. Dollars to put the right technology in place and get the people to run it. Organizational capital to push people into actually using data to drive decisions and aggressively test.

Which brings me to….

What to invest in

Our DM1 platform obviously. But that’s just one part of bigger set of analytics decisions. I wrote pretty deeply before the holidays on the various data collection technologies in play. Based on what I saw at NRF, not that much has changed. I did see some improvement in the camera side of the house. Time of Flight cameras are  interesting and there are at least a couple of camera systems now that are beginning to do the all-important work of shopper stitching across zones. For small footprint stores there are some viable options in the camera world worth considering. I even saw a couple of face recognition systems that might make point-to-point implementations for analytics practical. Those systems are mostly focused on security though – and integration with analytics is going to be work.

I haven’t written much about mobile measurement, but geo-location within mobile apps is – to quote the Lenox mortgage guy – the biggest no-brainer in the history of earth. It’s not a complete sample. It’s not even a good sample. But it’s ridiculously easy to drop code into your mobile app to geo-locate within the store. And we can take that tracking data and run it into DM1 – giving you detailed, powerful analytics on one of the most important shopper segments you have. It costs very little. There’s no store side infrastructure or physical implementation – and the data is accurate, omni-joinable and super powerful. Small segment nirvana.

The overall data collection technology decision isn’t simple or straightforward for anyone. We’ve actually been working with Capgemini to integrate multiple technologies into their Innovation Center so that we can run workshops to help companies get a hands-on feel for each and – I hope – help folks make the right decision for their stores.

People is the biggest thing. People is the most expensive thing. People is the most important thing. It doesn’t matter how much analytic technology you bring to the table – people are the key to making it work. The vast majority of stores just don’t have store-side teams that understand behavioral data. You can try to create that or you can expand the brief of your digital or omni-channel teams and re-christen them behavioral analytics teams. I like option number two. Why not take advantage of the analytics smarts you actually have? The data, as I’ve said many times before, is eerily similar. We’ve been working hard to beef up partnerships and our own professional services to help too. But while you can use consultants to get a serious analytic effort off the ground, over time you need to own it. And that means deciding where it lives in your organization and how it fits in.

Everything old is new again

I make no bones about the fact that I dived into store measurement because I thought the lessons of digital analytics mostly applied. In the year sense, I’ve found that to be truer than I knew and maybe even truer than I’d like. Many of the challenges I see in store analytics are the ones we spent more than decade in digital analytics gradually solving. Bad data quality and insufficient attention to making it right. IT organizations focused on collection not use. A focus on site/store measurements instead of shopper measurement.

Some of the problems are common to any analytic effort of any sort. An over-willingness to invest in technology not people (yeah – I know – I’m a technology vendor now I shouldn’t be saying this!). A lack of willingness to change operational patterns to be driven by analytics and measurement and a corresponding challenge actually using analytics. Far too many people willing to talk the talk but unable or unwilling to walk the walk necessary to do analytics and to use it. These are hard problems and it’s only select companies that will ever solve them.

Through it all I see no reason to change the core beliefs that drove me to start Digital Mortar. Shopper analytics is critical to doing retail well. In a time of disruption and innovation, it can drive massive competitive advantage if an organization is willing to embrace it seriously. But that’s not easy. It takes organizational commitment, some guts, good tools and real smarts.

Digital Mortar can provide a genuinely good tool. We can help with the smarts. Guts and commitment? That’s up to you!