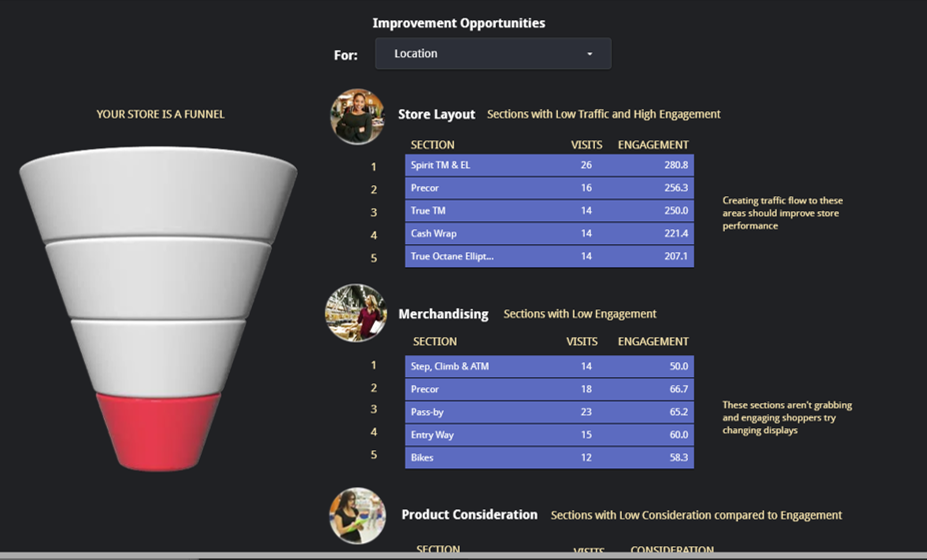 In the past year, we’ve publish a bunch of posts on in-store shopper tracking technologies: how they work and how they compare. Technology matters. In a mature market, the differences between technology offerings are usually incremental. Unfortunately, that’s not where we are with in-store people measurement. None of the people-tracking technologies are a complete solution and some of the technologies being peddled are hardly serviceable. Choose the wrong technologies for your store or requirements and it won’t matter how strong your analytics team is or how committed your business is to measurement – you’ll fail.

At the same time, technology is just an enabler. You can have the best most mature tech in the world and still manage to get next to nothing from it. As organizations move up the analytics maturity life-cycle, they invariably realize that the really hard part isn’t doing measurement it’s using measurement.

And using measurement starts with metrics and reporting. Starts, because metrics and reporting are themselves just the beginning of an analytics effort. Organizations often find themselves drowning in reports that nobody seems to pay attention to. But that doesn’t mean reporting is a step you can skip. It doesn’t work that way. Reporting sets the table for analytics by creating a shared understanding in the organization of what’s actually happening, where the potential problems are, and what the right way to think about the data is.

Viewed as a process, reporting is the organizations way of standardizing how it will talk about the data (metrics), what’s most important in the data (KPIs) and how data relates to business problems (reports). Until that stuff is fleshed out, an enterprise isn’t ready or able to successfully use the data for driving change.

A Framework for Reporting

Reports are like flying. Everybody complains about it but (at least until Covid) we did more and more of it every year. Reports are a pain to build, a nightmare to support. And nobody uses them. So what’s not to like?

There are at least four different types of reporting common in the enterprise. The most important and least glamorous is operational reporting. Operational reports are for hands-one line-managers who need numbers every day or every week to run their function.

And this where a lot of reporting goes awry. Most people in an enterprise don’t need those numbers to manage their function. They just need to know when things go wrong. For those people, operational reports are painful burden. They are too bulky, too detailed and too regular to actually spend time reading. But because they contain data that occasionally signal problems, the people who get them are blamed when they didn’t notice a problem. We’ve all been in this boat. At sea in an ocean of reports that are usually useless but occasionally vital. The solution for this kind of user isn’t reporting at all. It’s alerting. Trying to build reports that highlight problems is a waste of time and energy. In few well-run enterprises are there enough problems to make that worthwhile. Just find a way to get clearly labeled alerts to people so that they only get them when something is really wrong.

Good enterprise intelligence reporting shouldn’t be judged by how often reports are opened or whether those reports drove action. It should be judged on whether it raises the level of intelligence in the organization and standardizes the enterprise conversation around meaningful topics.

Operational, Alert-based and Enterprise Intelligence are the most common and familiar report types. For a more mature organization, analytic reporting is designed to bridge the world of analytics and reporting. Analytic reports are based on a predictive model and blend forecasting and reporting functions. This is the fourth type of reporting and it’s unique in that it is explicitly designed to put analytics at the service of action since it offers the ability to generate and test “what-if” scenarios based on a model of the marketing system or business.

When it comes to people-measurement and in-store analytics, all of these reporting types might be in play, but the best place to start is with enterprise intelligence. If you’re doing Associate measurement, operational reporting may come to the forefront. But store operations just don’t depend on shopper behavior. If they did, more stores would have this kind of measurement. There are useful alerting functions – particularly when it comes to merchandising. But because most retailers have never had in-store shopper behavioral reporting, there isn’t enough shared understanding to make alerting practical. You need to build up enterprise knowledge enough to make alerting reports viable. Ditto for predictive analytics. That takes time, knowledge and data – none of which will exist when you first roll out a system.

Since the enterprise probably doesn’t have an established way to talk about the data or the behavior for in-store shopper analytics, focusing on enterprise intelligence reporting is the best way to start. Getting this right is a huge step toward better in-store analytics and experimentation – because, to paraphrase an old measurement adage – you can’t improve what you can’t talk about.