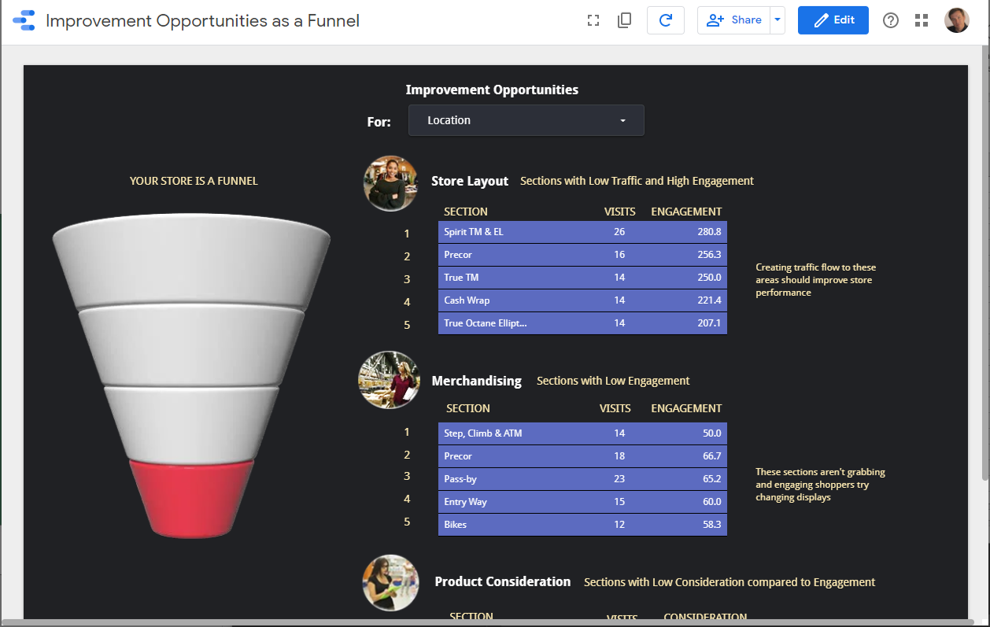 Most parts of the modern enterprise have long been translated into specific reporting frameworks that are well understood and time-proven. For a CFO, the head of eCommerce or the Manager of the Call-Center, there are a preexisting set of widely used metrics, a generally agreed upon subset of Key Performance Indicators, and a number of commercial off-the-shelf reporting tools that provide standardized views of the data. They don’t have to invent a language for describing their operations or figure out what’s most important. That work has largely been done. Individuals will have their own twists and interpretations, not everyone will agree on what’s most important, but the broad framework for conversation is there. When it comes to in-store shopper analytics, that’s just not the case.

Retailers have had three sources of detailed information in the past. The first is from their supply chain. They know what’s in production, what’s being shipped, what’s on the shelves and how long it stays on the shelves. The second source of information is Point-of-Sale. Retailers know what sold, for how much, with what discount and in what kind of basket. With loyalty programs, they also know a lot about the customer buyer. Finally, nearly all retailers of any sophistication have door-counting. So, they know how many people went in the store.

That’s all great stuff. But do you see a gap in that chain? You should, because it’s a huge one. Retailers know next to nothing about what happens inside the store. Between Foot-Traffic entering and PoS, the store is a gigantic black box. It’s a black box that’s only opened by personal observation, anecdotal evidence, and occasional high-level voice of customer research.

That means when a retailer first gets detailed in-store behavioral data, they lack both a framework for using it and the experience to know what’s important. That framework matters. It drives a surprising amount of how and how effectively data gets used. In digital analytics, early measurement tools adopted a page-based reporting model that, to this day, causes most organizations of focus more on the site and less on the visitor. That framework grew organically from fundamental limitations in the measurement ecosystem not from real business imperatives or careful thought.

So, it’s worth spending some time when you first engage with a new data set or a new tool to think about the metrics you’re getting. What they represent. And even more importantly, what they miss.

Traffic by Area
For an organization just learning how to use in-store behavioral analytics, it’s best start with something really simple. Nobody starts learning physics by tackling quantum mechanics.

What’s a good metric to start your in-store analytics journey? Traffic by Area. Most stores already have a good sense of foot traffic from their door-counting solution. They know how many came in the store. They know how much it varies by day and season. And they know which times of day are busiest. And by comparing traffic to PoS, they know conversion rates by all those factors as well.

But that still leaves the in-store journey as a big black box. You can start illuminating that black box by looking at foot-traffic for each area of the store. Traditionally, stores will think of their space as divided into floors (for large, multi-level stores), departments, sections within departments and merchandising areas withing sections. Traffic is interesting at each of these levels. At the Floor level, knowing how many people made it to each floor is surprisingly interesting – and is essential for optimizing store layouts and properly understanding conversion rates.

Traffic by department provides a sense of shopper’s focus points, though it’s also heavily influenced by store and door geography. Traffic by section helps measure shopper focus AND value of specific locations in the store. Traffic at the merchandising area level gives a sense of actual product opportunity.

In every case, understanding traffic from a comparative standpoint (Area X gets 3x the traffic of Area Y) and as a percentage of total store traffic is interesting.

It’s also important to realize that there are two different flavors of store traffic metric. In one, you measure how often a shopper enters the area. In the other, you measure the number of distinct shoppers who entered an area. What’s the difference? It all has to do with journey. In a store with a single entrance, every customer will enter and exit through one area of the store. In a single visit to the store, a shopper may enter and exit a section 5 or 6 times. If you’re not tracking on a journey basis, each separate entry by that shopper is a visit to the area and traffic to a single section may be 2 or 3x total store traffic.

If you’re measuring based on journey, then a shopper will only be counted once per area. With journey measurement, no section can have more than 100% of store traffic (though if you add up store sections you’ll get much more than 100%).

Both metrics have meaning. Having a shopper go through an area twice creates additional opportunities for engagement and conversion. But it’s not as good as having 2 different shoppers go through once. Just be aware of what you’re looking at.

What’s an area?
Traffic by area is a simple, useful, natural extension to the entrance traffic that most retailers already have from their door-counting.

But telling an enterprise to start with traffic by area begs an important question. What’s an area? People-tracking technologies produce a stream of data that is x,y coordinates, timestamp and a random but unique person identifier. Those x,y coordinates – at least for camera data – are very precise. We typically know down to a single square foot where a shopper was in the store.

There are times when you’ll want that level of detail. Particularly when doing display analytics, the difference between square feet can be significant. In one test, we looked at where on tables shoppers were most likely to engage with product – an anlysis that required that kind of square foot level resolution.

But while square foot is useful for fine-grained display analytics, it’s too detailed for most purposes. Usually, an area is some grouping of square feet. Mostly, those groupings are contiguous, but they don’t have to be. If you have Nike branded apparel in multiple places in the store, you might reasonably look at traffic by area where the area is the sum of a bunch of non-contiguous Nike displays. Doing that kind of analysis lets you look at the total performance of each brand based on the amount of store space allocated.

The most common way to handle traffic by area is to create a series of hierarchical layers. At the lowest level is traffic by square foot or meter. One level up is traffic by merchandising area. Up from that is the section. Then a department level. Above department you might have something like floor and then store.

For example, you might want to create a Section/Department/Floor View but then have a Functional View where you aggregated areas into functional blocks. In a functional view, all cashwraps would be a single functional block regardless of which Department they are in. Ditto for travel spaces, waiting areas, merchandising areas,, etc. Or you might want a separate hierarchy by Brand so that you can get traffic brand but not sacrifice traffic by section. Both are useful, but they are completely different numbers.

In other words, the best answer to “what’s an area” is really “any darn thing you please” because there are a lot of different ways to usefully think about carving up a store.