The DM1 Roadmap: A peek into the future of store analytics

The DM1 Roadmap: A peek into the future of store analytics 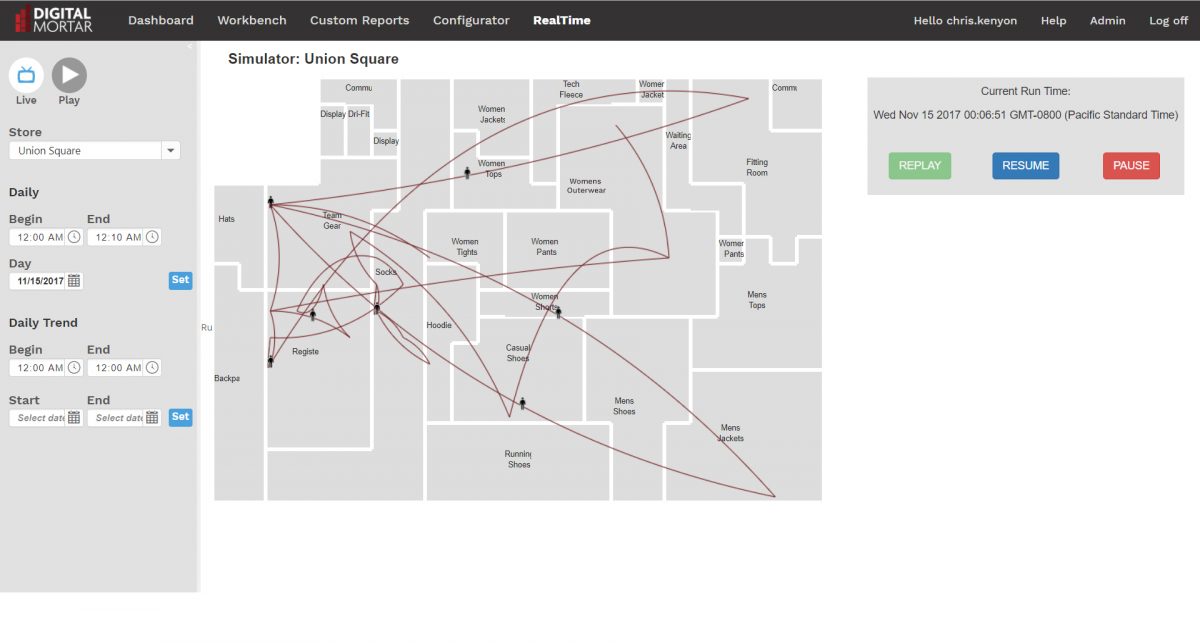 We just did our first non-incremental release of the DM1 store analytics platform since we brought it to market. It brings new analytics views to the Workbench, a host of UI and analytic tweaks, new cloud options and, best of all, real-time and full-store playback functionality to the product. Real-time creates a bevy of opportunities to operationalize measurement in both operations and marketing. So DM1 can drive more value, faster. What’s next? At the end of my last post, I described some of the juicier features slated for upcoming release: a real-time, dedicated Store Managers console, full pathing and even some machine learning applications. But I want to step back from a feature list and talk a bit about where we see the DM1 platform headed and how we try to balance and prioritize new functionality as we shape the product. It’s hard to do because we love all the new features.

From a personal perspective, no part of building Digital Mortar is more interesting or more intellectually challenging than building DM1. On the one hand, building SaaS systems in the cloud today is incredibly gratifying. You can build powerful, beautiful stuff so much faster and easier than back in the ‘80s when I first started programming or even in the late ‘90s when Semphonic took an abortive shot at building a web analytics tool. But an embarrassment of riches is still an embarrassment. Throwing stuff at a wall doesn’t make for a coherent product road-map. So when we think about new feature prioritization for DM1, we start with our core product vision.

DM1 is designed to be the measurement backbone of the store. We see the store as a learning machine with the core methodologies we brought from digital: continuous improvement through test & measure driven by analytics based on behavioral segmentation (what people actually do) and the ability to break-down shopper journeys into discrete, analyzable steps.

That core vision shaped our initial DM1 release (what Valley folks love to call the MVP – an acronym that is surely designed to suggest the sporting world’s Most Valuable Player award but actually stands for Minimally Viable Product). When DM1 went live, just about every piece of it was specifically targeted to this core vision. It provided direct access to a bunch of journey metrics that described how the store performed, it included basic shopper segmentation to analyze cross-sell patterns and do simple day-time parting, and it included a pretty robust funnel tool for breaking down shopper journeys into individual (step) components.

Let’s call this basic shopper-journey, store measurement system DM1’s core. It’s the engine that drives and integrates every other aspect of what the product might eventually do. Coming out of the digital analytics world, we tend to map a lot of our thinking into that model. The DM1 core is the equivalent of Adobe Analytics in the broader Adobe Marketing Suite. It’s the analytic and measurement engine.

Right now, most of our focus will continue to be on building that core engine.

Of the significant features we have slated for short term development, here are the ones that contribute directly to the core function of the program:

New and More Comprehensive Associate Reporting: Track individual and team performance on the floor with optional integration to VoE, employee meta-data, and VoC from in-store visits. DM1 already includes a lot of generalized Associate analytics, but this report will distill that into a set of reports that are much easier to digest, understand and act on.

D3 Integration: DM1’s current charting capabilities are pretty basic. We use an off-the-self package and we provide straightforward bar and line charting. Probably the best part of the charting is how seamlessly DM1 picks the best chart types, intelligently maps to separate axes, and lets you easily combined “like indices” in a single chart. But we’re far from pushing the envelope on what we can do visually and by using D3 for our charting package, we’ll be able to considerably expand the range of our visualizations and support even deeper on-chart customization.

Full Pathing: We’ve been tinkering since day 1 with ways to bring full pathing to store analytics. On the one hands, it’s not really all that hard. The amount of data is much less than we’re used to in digital. Our engine passes the data exhaustively with every query, so full pathing isn’t going to strain us from a performance perspective. But stores don’t have discrete waypoint like pages on a Website which makes each shopper’s path potentially a snowflake. We’ve tried various strategies to meaningfully aggregate paths within the store and I think we’ll be able to produce something that’s genuinely interesting and useful in the next few months. This will supplement the funnel analytics and provide richer and more varied analysis of how shoppers flow through the store.

Segmentation Builder: DM1’s current segmentation capabilities are limited to basic filtering on a set of pre-defined types. It does provide a pretty nice ability to segment on uploaded meta-data, but you can’t build more complex segments using Boolean logic or Regex. Not only do I think that’s important for a lot of analytic purposes, it’s also something we can support fairly easily.

Store Groups: DM1 handles lots of stores, but right now, the store is the ultimate unit of analysis. We don’t support regions or fleet-wide aggregations. There are a lot of analytic and reporting problems that would be solved or made much easier with Store Groups. It’s a capability we’ve considered since Day 1 and sooner rather later I except it to be in the product.

Fully Integrated Dashboard: V2 didn’t do much to evolve the dashboard capability of the product, but we have a pretty clear direction in mind. In the next release, I expect the Dashboard to be capable of containing ANY Workbench view. That’s a simple elegant way to let analysts customize the dashboard to their taste and produce exactly what they need for the business. I remember a computer scientist from the original deep-blue chess program saying something to the effect that “Exhaustive search means never having to say your sorry”. No matter how much capability we build out in the dashboard, analysts are always going to want something from the Workbench if it does more. So I think it just makes sense to unify them and let the Dashboard do EVERYTHING the Workbench does.

Not everything we have in mind is about the core though. In the next few months, we plan to release a Store Manager Console based on the new real-time capabilities. The Store Manager Console is a whole new companion capability for DM1 targeted to a fundamentally different type of user. DM1 core is for the corporate analyst. It’s a big, powerful enterprise measurement tool. It’s definitely more than most Store Managers could handle.

But while the centralized model works really well in digital analytics (since Websites are wholly centralized), it’s less than ideal in the store world. There are a lot of decisions that need to happen locally. DM1’s Store Manager console will continuously monitor the store. It will keep track of shopper patterns, monitor queue times, alert if shoppers aren’t getting the help they need, and make it easy for Store Managers to allocate staff most effectively and message them when plans need to change.

As I hope our rate of progress has already made clear, we’re ambitious. Software design usually embodies deep trade-offs between functionality and ease-of-use or performance. Those trade-offs are challenging but not inevitable. We’ve seen how digital analytics tools like Google Analytics and data viz tools like Tableau have sometimes been able to step outside existing paradigms to deliver more functionality side-by-side with better usability. Most of what we’ve done so far in DM1 is borrow creatively from two decades worth of increasing maturity in digital analytics. Still, tools like our Funnel Viz and – particularly – our Store Layout Viz have tackled location/store specific problems and genuinely advanced the state-of-the-art. As we tackle pathing and machine learning, I hope to do quite a bit more of that and find ways to bring more advanced analytics to the table even while making DM1 easier to use.