It’s all about the Store: Visualizing In-Store Customer Journey Data

It’s all about the Store: Visualizing In-Store Customer Journey Data 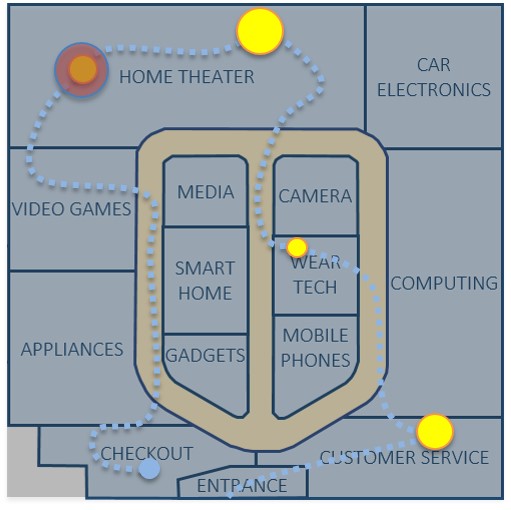 Making sense of behavioral data is always a challenge. Suppose I tell you that a shopper visited your store, spent fourteen minutes, lingered twice and had a single Associate interaction. That’s a lot of data, but in most respects, it’s deeply uninformative. What did the shopper care about? What were they interested in? What did they pass by?  What worked? What didn’t? You can’t even begin to formulate answers to those questions based on the data I described. I know, because I spent years trying and largely failing to do interesting analytics with metrics like these in the digital world. What’s missing from these metrics is the context. If you don’t know what was in the store at the place where the shopper lingered, you can’t attach meaning to the action. For in-store analytics, the basic context that gives meaning to the data is the store; specifically, what was there in the store at the place the visitor lingered.

We know a lot more (and lot more interesting stuff) about Shopper A and about store performance when the metrics are contextualized to the store. With the second table, we can likely guess that the shopper is a woman. That she’s interested in Jackets and Backpacks. That she entered the store shopping for Jackets. That the sales interaction wasn’t successful and likely concerned jackets.

This idea of contextualizing behavior to understand the customer better is incredibly simple and seemingly obvious. But it’s hugely powerful and when you’re suffering from a deluge of aggregated consumption metrics that lack this context, it can be surprisingly difficult to figure out what’s missing.

It can sure seem like the data ought to be useful. And there are some things you can do with this kind of data. Just don’t try to use it to answer any questions about customers, their journey, or store performance.

This type of store heatmap is certainly an attempt to contextualize behavior in terms of the store. And there’s no denying that heatmaps look cool. But if you’ve ever tried to use a heatmap like this for analytics, you’ve probably been massively frustrated.

The first problem with this type of heatmap is simple. It doesn’t really make it all that easy to know what’s in the store. Sure, if I’ve memorized a store layout, I might be able to map those colors onto actual store sections and products. But chances are, I’m going to have constantly flip back and forth between the heat-map and a planogram to make sure I know what I’m looking at.

The second big problem with heatmaps is that they don’t really provide a means of analysis. Look at these two heatmaps:

Can you tell that the yellow band in the upper left corner grew in size? That the red smear in the middle was a little less pink and little more red?

And even if you could pick out the differences, how could possibly communicate the nature and extent of the changes to anyone else?

When you do analysis, you need to find important differences in the data and you need to be able to communicate them. Heatmaps like this suck at both tasks.

And let’s say you made a change in the store. After all, that’s the reason you’re doing store measurement, right? What happens with the planogram? Which view do you see? And how do you compare the before vs. after and quantify the changes?

When we set out to build DM1, the single biggest problem on our minds was how to visualize store behavioral data effectively. We wanted a tool that fixed the problems with heatmaps and that could make in-store analytics come alive.

From our perspective, the store visualization capability in DM1 had to:

In other words, we wanted to make store visualization useful.

In my next post, I’ll show you what we built in DM1 and how it fulfills all of these requirements.