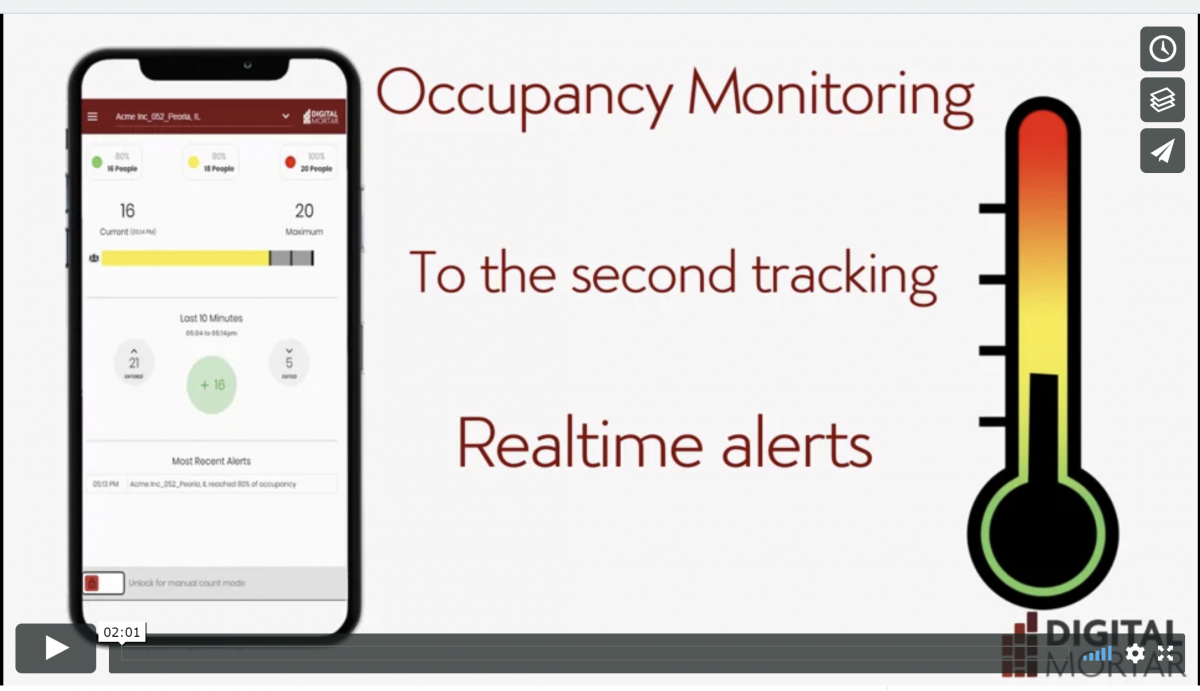 In my last post, I talked about why accuracy is critical to occupancy management. But I wanted to expand on that a bit and provide a bit of perspective on the technologies involved.

Occupancy Management starts with people-counting. For many years now, businesses have counted how many people entered their store, ride or experience. For a store, the door-count is an important analytic metric. When matched to sales it tells you the store conversion rate and it can help you figure out if a store’s sales performance (good or bad) is a function of opportunity or efficiency. For other types of facilities, door-count is simply a measure of usage – particularly by day-time part.

There are a lot of different ways to count how many people have come through a door or passed a threshold. Turnstiles are an old fashioned mechanical way to measure. Beam counters are a modern equivalent. But for the past decade or so, the most popular technology for people-counting has been camera.

It’s all about point-of-view. Nobody wants to restrict flow with mechanical devices. That’s a cumbersome and unwelcoming experience. Both beam counters and camera provide a completely non-intrusive counting experience. For the most part, nobody even knows that they are there.

But people-counting cameras are positioned in the ceiling. That means they have a birds-eye view of an entrance and they can see everybody entering. Even when a group of people come in together, from a top-down perspective, all of them are visible. Beam counters struggle with crowded entry-ways and groups (though they have their own advantages in situations where regular lighting isn’t available).

It’s also a case where the state-of-the-art in camera-based people-counting has progressed steadily. Given that there is no real physical limitation on the camera’s ability to see every person entering, it’s simply been a matter of steady improvement in the ML necessary to distinguish and count people.

The difference between those two numbers is important because accuracy matters much more for occupancy than it does for traditional people-counting. If you’re primary use-case for people-counting is understanding store efficiency, a camera missing 5% of the people coming in isn’t really a big deal. First, that’s a relatively small error when it comes to conversion and second, the error tends to be similar across all stores so numbers remain comparable. Cameras are much less likely to see someone who isn’t there than to miss someone who is there (though oddly enough, both do happen – we call the problem of the camera seeing people who aren’t there “ghosting”). So most camera people-counts will be slight undercounts.

For occupancy, on the other hand, even small levels of inaccuracy can result in real problems. For a busy store with 2,000 visitors a day, a 5% error in people-counting is 100 people. That 100 people might be close to the maximum occupancy for the store at any single time of day! What that means is that at the end of the day, a 95% accurate people-counting solution could be wildly off in its occupancy count.

Getting that number down to 0.5% makes a huge difference. Now your worst-case is 10 people off. And since the number resets at the end of the day when the stores close, it will never get worse.

So if you’re thinking about people-counting, you have a wider choice of sensors and you can use cheaper cameras and still be pretty confident you’re getting the analytics you need. But if you’re tackling occupancy management, you really do need to invest in the most accurate people-counting cameras.